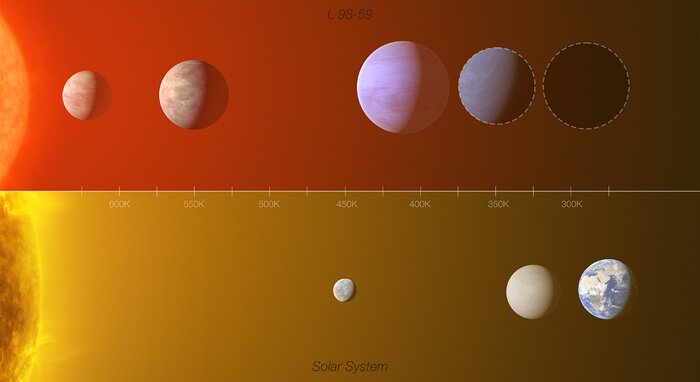 This infographic shows a comparison between the L 98-59 exoplanet system (top) with part of the inner Solar System (Mercury, Venus and Earth), highlighting the similarities between the two.

L 98-59 contains four confirmed rocky planets (marked in colour in the top panel), orbiting a red-dwarf star 35 light-years away. The planet closest to the star is around half the mass of Venus, making it the lightest exoplanet ever detected using the radial velocity technique. Up to 30% of the third planet’s mass could be water, making it an ocean world. The existence of the fourth planet has been confirmed, but scientists don’t yet know its mass and radius (its possible size is indicated by a dotted line). The team also found hints of a potential fifth planet, the furthest from the star, though the team knows little about it. If confirmed, it would sit in the system’s habitable zone where liquid water could exist on its surface.

The distances from the stars and between the planets in the infographic are not up to scale. The diagram has been scaled to make the habitable zone in both the Solar System and in L 98-59 coincide. As indicated by the infographic, which includes a temperature scale (in Kelvin [K]), the Earth and the fifth (unconfirmed) planet in L 98-59 receive similar amounts of light and heat from their respective stars. Assuming their atmospheres are similar, this fifth planet would have a similar average surface temperature to Earth and would support liquid water at its surface.