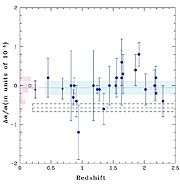 PR Billede eso0407a
Relative changes with redshift of the fine structure constant
Send us your comments!
Subscribe to receive news from ESO in your language
Accelerated by CDN77
Regler og vilkår