The Comet With a Broken Heart

On the night of April 23 to 24, ESO's Very Large Telescope observed fragment B of the comet Schwassmann-Wachmann 3 that had split a few days earlier. To their great surprise, the ESO astronomers discovered that the piece just ejected by fragment B was splitting again! Five other mini-comets are also visible on the image. The comet seems thus doomed to disintegrate but the question remains in how much time.

Comet 73P/Schwassmann-Wachmann 3 (SW 3) is a body with a very tormented past. This comet revolves around the Sun in about 5.4 years, in a very elongated orbit that brings it from inwards of the Earth's orbit to the neighbourhood of giant planet Jupiter. In 1995, when it was coming 'close' to the Earth, it underwent a dramatic and completely unexpected, thousand-fold brightening. Observations in 1996, with ESO's New Technology Telescope and 3.6-m telescope, at La Silla, showed that this was due to the fact that the comet had split into three distinct pieces. Later, in December 1996, two more fragments were discovered. At the last comeback, in 2001, of these five fragments only three were still seen, the fragments C (the largest one), B and E. No new fragmentations happened during this approach, apparently.

Things were different this time, when the comet moved again towards its closest approach to the Sun - and to the Earth. Early in March, seven fragments were observed, the brightest (fragment C) being of magnitude 12, i.e. 250 fainter than what the unaided can see, while fragment B was 10 times fainter still. In the course of March, 6 new fragments were seen.

Early in April, fragment B went into outburst, brightening by a factor 10 and on 7 April, six new fragments were discovered, confirming the high degree of fragmentation of the comet. On 12 April, fragment B was as bright as the main fragment C, with a magnitude around 9 (16 times fainter than what a keen observer can see with unaided eyes). Fragment B seems to have fragmented again, bringing the total of fragments close to 40, some being most probably very small, boulder-sized objects with irregular and short-lived activity.

The new observations reveal that this new small fragment has split again! The image clearly reveals that below the main B fragment, there is a small fragment that is divided into two and a careful analysis reveals five more tiny fragments almost aligned. Thus, this image alone shows at least 7 fragments. The comet has thus produced a whole set of mini-comets!

Will the process continue? Will more and more fragments form and will the comet finally disintegrate? How bright will the fragments be when the comet will be the closest to the Earth, on 11 to 14 May, and how many new fragments will have appeared before the comet reaches its closest approach to the Sun, around 7 June?

Fragment C of the comet should be the closest to Earth on 11 May, when it will be about 12 million km away, while fragment B will come as 'close' as 10 million km from Earth on 14 May. Although this is the closest a comet ever approached Earth in more than twenty years - even Comet Hyakutake's smallest distance was 15 million km - this is still 26 times the distance between the Earth and the Moon and therefore does not pose any threat to our planet.

If nothing else happens, at the time of closest approach, fragment B will be just visible with unaided eye by experienced observers. It should be an easy target however to observe with binoculars. If we are lucky, however, fragment B presents another outburst, becoming a magnificent sight in the night sky. On the other hand, it could just as well fade away into oblivion. But then, the main fragment C should still be visible, even possibly with the unaided eye.

ESO telescopes will observe the comet in the greatest detail at the end of May, when it is best observed from Chile and is brighter. These observations will obtain invaluable information, especially as the fragmentation process is revealing all the pristine material buried below the crust of the comet. As such, these observations will prove an ideal complement to the most comprehensive observation campaign made with ESO telescopes of Comet Tempel 1 when it was being bombarded by the Deep Impact spacecraft, on 4 July 2005.

About 30 comets have been observed to split in historical times and this process is almost always accompanied by a significant brightening. For instance, the nucleus of comet Shoemaker-Levy 9 broke up into at least 21 individual pieces when it passed very close to Jupiter on July 8, 1992; this was the reason that it became bright enough to be detected some eight months later. In the case of SW-3, the opening of rifts and the subsequent splitting took place far from any planet and must in some way have been caused by increased solar heating. It is possible that major cracks and rifts opened in the irregularly shaped icy nucleus already before perihelion as the surface temperature began to increase. Completely "fresh" cometary material was thereby exposed to the solar light and the evaporation rate increased quickly, releasing more gas and dust into space. In the course of this process, the rifts gradually widened until the definitive breakage occurred somewhat later.

Comet Schwassmann-Wachmann 3 was discovered on May 2, 1930, on a photographic plate obtained at the Hamburg Observatory (Germany) by two astronomers at this institution, Arnold Schwassmann and Arthur Arno Wachmann. The subsequent observations showed that the comet moved in an elliptical orbit with a revolution period of somewhat more than 5 years. Great efforts were expended to observe the comet during the next returns, but it was not recovered until nearly 50 years and eight revolutions later, when its faint image was found of a plate obtained in August 1979 with a telescope at the Perth Observatory in Western Australia. It was missed in 1984, but was sighted again in 1989 and since then, it is observed at each close approach. Thus this comet has only been observed during six out of fifteen approaches since 1930. While this may be partly due to a less advantageous location in the sky at some returns, it is also a strong indication that the comet behaves unpredictably and must have a quite variable brightness. Orbital calculations have shown that it was inserted into the present, short-period orbit by the strong gravitational pull of Jupiter during several, relatively close encounters with this giant planet. For instance, it passed Jupiter at a distance of about 30 million kilometres in 1882 and 1894, and again at 40 million kilometres in 1965. SW-3 belongs to the so-called "Jupiter family" of comets.

The observations were done with the FORS1 multi-mode instrument on Kueyen, the second 8.2-m Unit Telescope of the Very Large Telescope located at Cerro Paranal (Chile). The fragment was observed in four bands (B, V, R, and I) for a total of 30 minutes by Emmanuel Jehin, Olivier Hainaut, Michelle Doherty, and Christian Herrera, all from ESO. The astronomers had the telescope track the comet, which explains why the stars appear as trails of coloured dots, each colour corresponding to the order in which the observations were done in the various filters. At the time of the observations, the comet was 26.6 million km away from the Earth, in the constellation Corona Borealis. The seeing was 1.5" as the comet was observed when it was rather low on the horizon as seen from Paranal. The final processing of the image was done by Haennes Heyer and Olivia Blanchemain (ESO).

More observations of the comet are foreseen from 20 till 30 May with ESO telescopes on the three sites of La Silla (NTT, 3.6m), Paranal (VLT) and Chajnantor (APEX). These observations will study aspects as diverse as the presence of organics in the dust, the composition of this dust, the structure of the coma, and the presence of deuterated water. 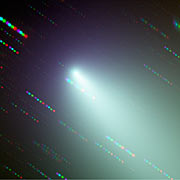 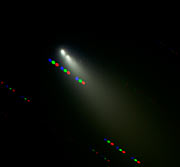 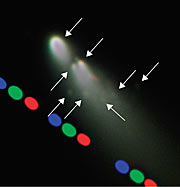