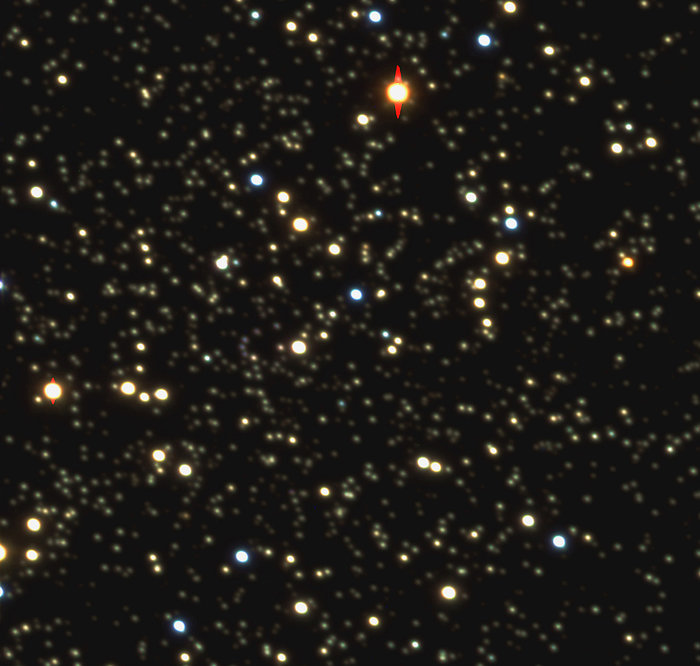 The globular cluster Messier 4 (M4 for short) is located about 6,000 light-years away. On the sky, it is seen in the southern constellation Scorpius, It is an ensemble of about 500,000 stars, held together by their mutual gravitational pull. There are about 150 such clusters in our Galaxy, and M4 is the one closest to us.

This colour picture has been obtained by combining three images taken through three different filters at the wavelengths of blue, green, and red light. They were obtained during the night of May 22, 1998. In this way, the stars are seen in their true colours, ranging from blue for very hot stars (about 10,000 degrees) to red for the cooler ones (about 4,000 degrees).

With an exposure time of only 2 minutes, the VLT has been able to detect in the blue light stars as faint as magnitude 24. This corresponds to 15 million times dimmer than the faintest stars visible to the naked eye. This was achieved even though the image has a fairly high background, being taken with the Moon above the horizon (3 days before New Moon, with 18% illumination). The large mirror surface of the VLT UT1 (53 m 2 ) and its ability to produce very sharp images (measured as 0.53 arcsec on these images), unequalled by any ground-based telescope, ensures that faint objects may be observed extremely efficiently, especially under the good conditions that prevailed during this observation.

Note that, because of the limitations in the printing process, these faint stars cannot easily be seen in this glossy reproduction.