The latest issue of Science in School, the European journal for science teachers, is now available online and in print. Issue 18 marks five years since Science in School was launched in March 2006. The journal promotes inspiring science teaching by encouraging communication between teachers, scientists and everyone else involved in European science education, and every issue is jam-packed with informative articles.

This issue features cutting-edge science news, teaching activities, science education projects, events, and much more besides. ESO contributions in this issue include news about the first super-Earth atmosphere being analysed by astronomers using ESO telescopes, and an account of a student winning an ESO prize in the European Union Contest for Young Scientists, which took him on the trip of a lifetime to the Very Large Telescope on Cerro Paranal in Chile.

Science in School is published by EIROforum, a collaboration between eight European intergovernmental scientific research organisations, of which ESO is a member. The journal addresses science teaching both across Europe and across disciplines: highlighting the best in teaching and cutting-edge research. 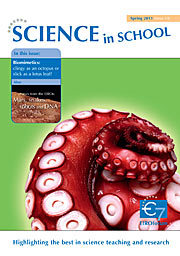