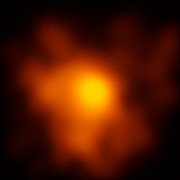 Foto PR eso1637d
The Carina Nebula in the constellation of Carina