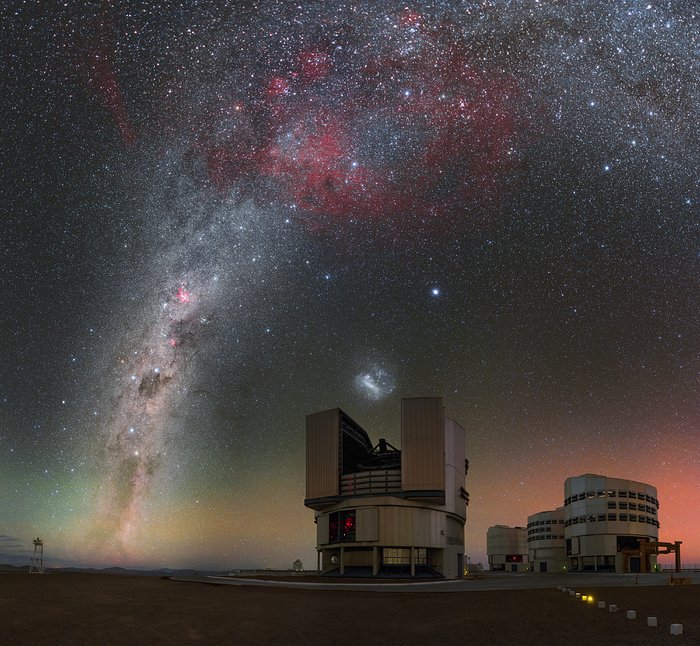 This beautiful Picture of the Week shows the magnificent Milky Way stretching over the Very Large Telescope (VLT) at ESO’s Paranal Observatory, demonstrating the astounding level of detail visible in the night sky from this remote site in the Chilean Atacama Desert.

At Paranal, the star-studded Milky Way is so bright that on a dark night it can cast shadows of the people and objects beneath it! This image shows countless stars, dark lanes of dust, and glowing clouds of celestial gas. These clouds are sites of star formation; energetic radiation emanating from newborn stars ionizes the hydrogen in the gas clouds, causing them to glow a rosy red. Below the Milky Way is the Large Magellanic Cloud, a dwarf galaxy orbiting the Milky Way.

The night sky is observed every night by the world’s most advanced optical observatory the VLT. This telescope is actually made up of four Unit Telescopes, all of which can be seen in this image, and four smaller moveable Auxiliary Telescopes (one of which can been in the distance to the left of the foreground Unit Telescope). Each Unit Telescope has a main mirror measuring 8.2 metres in diameter, and is able to see objects four billion times fainter than those we can see with the unaided eye. Just imagine what the VLT can see in this glorious night sky!