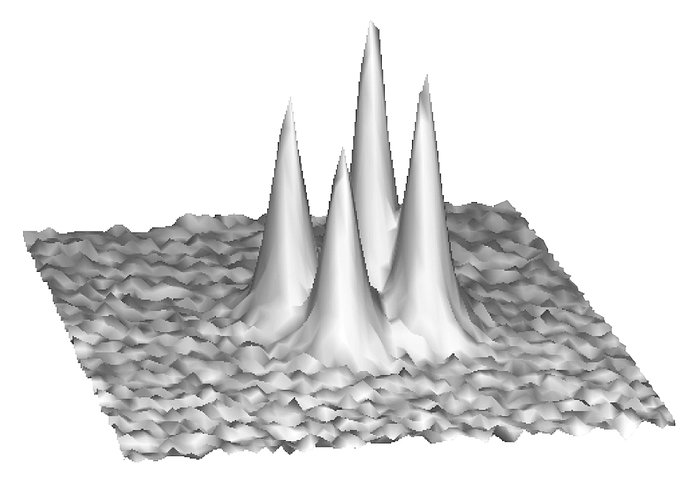 The phenomenon of gravitational lensing occurs when light rays are deflected by the gravitational influence of an intervening, massive object e.g. a heavy galaxy, along the light path. Gravitational lensing was originally studied as a curiosity ("cosmic mirages"), but is now known to be a powerful tool for mapping the mass distribution of the lensing objects. In particular, it may provide information on the mysterious dark matter in the Universe. Under favourable circumstances, it may also be used for the determination of the Hubble Constant, that is related to the age of the universe.

The Clover Leaf quasar (QSO 1413+117) is located in the constellation Bootes. It is a text-book case of a distant quasar, (at redshift 2.6, i.e. the look back time is 80% of the age of the Universe), whose single image has been split into four different components by the gravitational action of a very faint, but massive, intervening galaxy. This galaxy, however, is not observed in visible light and hardly detected in the infrared.

All four components exhibit nearly identical spectra, with rare features leaving no doubt on their lensing origin. The compactness of this object - the largest distance between two components is only 1.35 arcsec - makes it very difficult to observe in detail, especially with ground-based telescopes. Its study calls for very good instrumental and atmospheric conditions.

This is a 3D-representation of a 2-minute VLT image of the Clover Leaf quasar, obtained on May 16, 1998, in red light (R-band) during a period of excellent seeing (0.32 arcsec), as measured with a seeing monitor at the top of Paranal. The recorded, angular resolution of this image is just 0.38 arcsec and demonstrates the near-perfect optical quality of the telescope. It is certainly one of the best ground-based images of this object ever obtained.