ALMA array’s vision extended to include wavelengths between 6 and 8.5 millimetres

The Atacama Large Millimeter/submillimeter Array (ALMA) Board has approved the production of Band 1 receivers, developed by an international team led by the Academia Sinica Institute of Astronomy and Astrophysics (ASIAA) in Taiwan, East Asia. When installed on the telescope they will enable it to detect radiation having wavelengths between 6 and 8.5 millimetres [1], opening a window onto the southern hemisphere at these wavelengths.

ALMA’s Observatory Scientist, John Carpenter, described the main drivers for the use of Band 1 as “probing the evolution of dust grains as planets form in circumstellar discs; and detecting molecular gas in re-ionisation epoch galaxies”. With the new receivers the observatory will be even better equipped to observe the high-redshift Universe.

In order to capture radiation from distant cosmic sources over a broad range of wavelengths within the millimetre and submillimetre region of the spectrum, each ALMA antenna is equipped with several different receivers, each of which operates over a specific range of wavelengths. To date seven out of a planned ten receivers have been installed on each ALMA antenna. A total of 73 of the new Band 1 receivers, covering wavelengths between 6 and 8.5 millimetres, will be delivered between now and the end of 2019 and installed as they arrive. Installation will be complete by the first quarter of 2020.

The development of the ALMA Band 1 receiver took ten years. For the last eight years the project has been led by ASIAA, accompanied by an international team comprising the National Astronomical Observatory of Japan, the University of Chile, the National Radio Astronomy Observatory, the Herzberg Institute of Astrophysics and the National Chung-Shan Institute of Science and Technology.

“The fact that the ALMA Board approves Band 1 confirms the excellent technical level of all the members of the partnership,” says Ricardo Finger, part of the Band 1 team from the Center for Astrophysics and Associated Technologies at the Universidad de Chile, which will be responsible for two components of the optics: the horn antenna and a Fresnel lens.

[1] The ALMA bands are numbered in order of increasing frequency. Band 1, with the lowest frequency coverage, corresponds to the longest wavelengths. 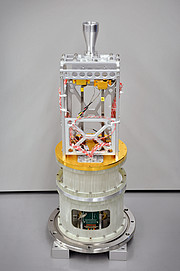